Being able to continuously deploy your application is an important part of your success. For ECS based applications there are not only multiple ways to deploy but also several options like container health checks, grace periods, container dependencies, and ALB health checks to adjust the behavior.

The goal of this blog post is to show what exactly happens during the deployment to get a better understanding of how these settings work together.

For the matter of simplification this blog post focuses on an ECS Service running on Fargate behind an Application LoadBalancer. It uses the built-in rolling update deployment type for CloudFormation. Other use-cases and configurations might differ a bit.

First, an overview of all components and settings that are involved:

A task is a logical construct for executing one or more containers. Tasks have their own lifecycle to indicate the current state of the containers and it can change from PENDING to ACTIVATING, RUNNING, DEACTIVATING, STOPPING, DEPROVISIONING and finally STOPPED.

Each container of a task can define its own health check. These parameters correspond to the HEALTHCHECK parameters of docker run. Note that the HEALTHCHECK within a docker file is not considered by ECS. A typical health check contains a command that is executed and must be successful multiple times (retries). The time between these calls is called interval. The interesting part here is startPeriod. It’s an optional grace period to provide containers time to bootstrap before failed health checks count towards the maximum number of retries.

The ECS Service is responsible to start and stop tasks and to (de)register them with the LoadBalancer. It also orchestrates deployments of newer versions.

The optional deploymentConfiguration parameters controls how many tasks run during the deployment. It’s only used with ECS rolling update deployment type (blue/green (CODE_DEPLOY) or EXTERNAL deployment types ignore these settings). minimumHealthyPercent indicates the percentage of tasks that must remain in RUNNING status during a deployment, depending on the desiredCount. maximumPercent parameter represents an upper limit on the number of your service’s tasks that are allowed in the RUNNING or PENDING state during a deployment. It’s always a percentage of the current desiredCount.

As soon as a task has reached the RUNNING state, it is added as a target to the configured TargetGroups of the LoadBalancer. The TargetGroup must define a health check which controls the status of the target. Similar to container health check there are a command, interval and retries. The target starts as initial and can then switch to either healthy or unhealthy. As soon as it is healthy it gets traffic. If a target becomes unhealthy the ECS service takes care to stop the task and start a new one if necessary.

To support tasks that need longer to start a healthCheckGracePeriod can be defined. This period starts as soon as the container changes to RUNNING status and during this time health checks of the LoadBalancer TargetGroups as well as container and Route 53 health checks are ignored.

The life of an ECS Task

Now that we know all the important components involved, let’s take a closer look at what happens when an ECS task is started. 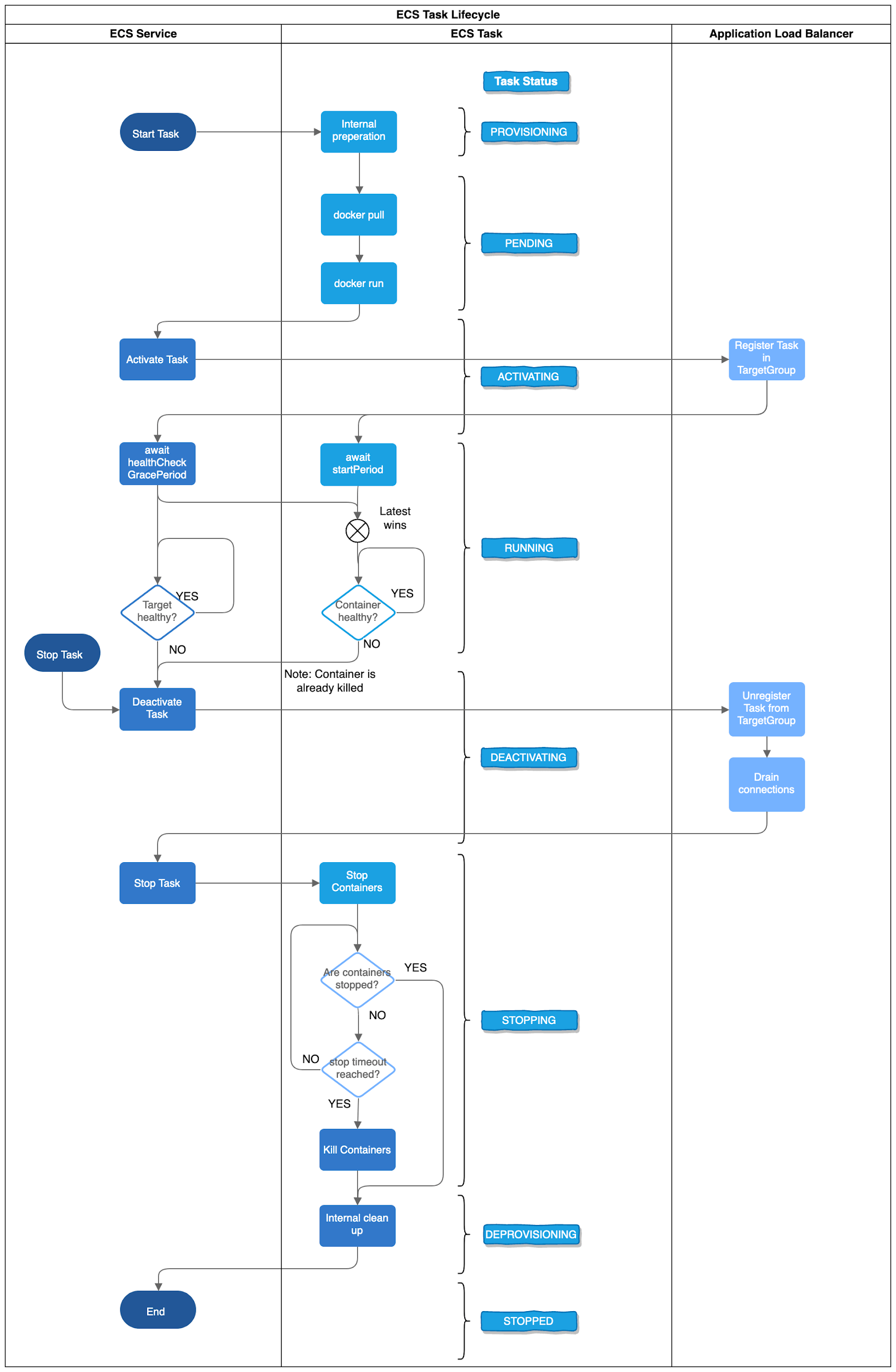 Every task starts with the PROVISIONING status. Thereby internal resources such as network interfaces are provisioned.

Once the task has been successfully started, it gets the ACTIVATING status and is registered with all configured TargetGroups. Also, the respective health checks are started.

If a startPeriod is defined for the container HealthCheck, the results of the health check for this period are ignored. In case the healthCheckGracePeriod is also configured, the larger value wins. If the health check is unhealthy the Docker Daemon stops this container and the ECS task is stopped (if the task is marked as essential which is the default).

Similarly, if the TargetGroup has the healthCheckGracePeriod defined, the results of the LoadBalancer health checks are ignored during this period. Task which are healthy gets traffic from the load balancer but once they become unhealthy no more traffic is sent to them and the ECS service takes care that the Task gets stopped.

With DEACTIVATING the task is unregistered at all configured TargetGroups. For the duration of the configured deregistration_delay timeout, the load balancer will allow existing requests made to complete. Once the timeout is reached, any remaining connections will be forcibly closed.

The resources created in the provisioning phase will be cleaned up again during DEPROVISIONING. And finally, the task reaches its final STOPPED status.

CloudFormation is one of multiple ways to run an ECS deployment. Thereby a Rolling Update is performed which can be adjusted with the deploymentConfiguration.

Unfortunately, the interaction between CloudFormation, ECS and the ALB can lead to unexpected results. The table shows which combinations lead to which final stack status. The lines with ❗ should indicate which results are not necessarily expected. 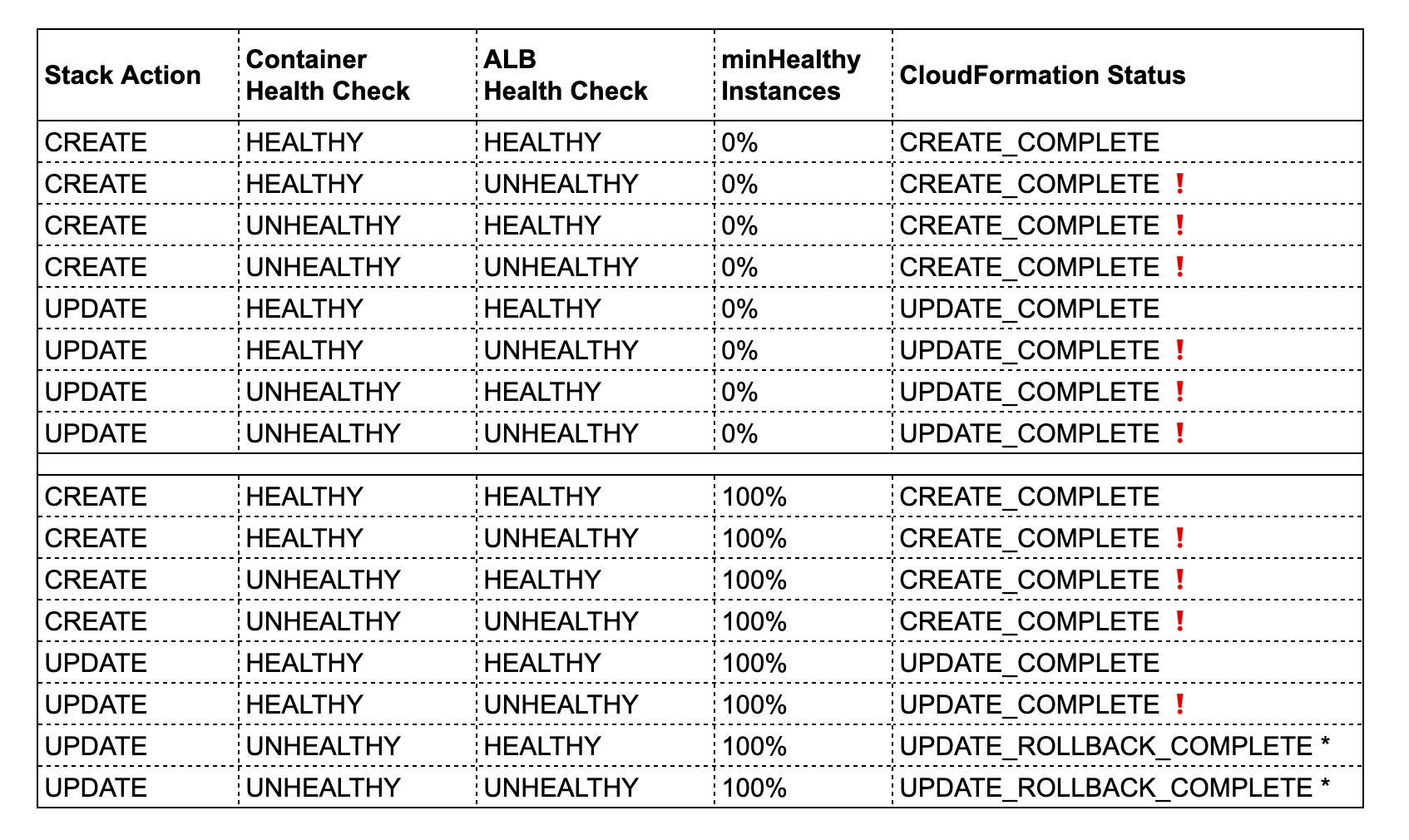 * The rollback is triggered after a timeout of 3 hours where CloudFormation waits for the ECS Service deployment to stabilize.

This is a list of things that are not obvious but very important to keep in mind:

What should you do now?